Citywire case study: what’s going on in the ecology sector?


Heavy hitters in the ecology sector have seen a huge run-up in assets over the start of 2021, but what does it say for the health and depth of the sector? Frank Talbot takes a closer look.

As the demand for ESG investments reaches fever pitch, the assets in actively managed ecology funds trebled in the space of a year. But is there the liquidity to justify this scale of investment, in what until recently was very much a niche play?

This potential liquidity concern is highlighted by the two largest funds in the sector soft closing to new investment this year. The situation has been exacerbated by the influx of money into ESG ETFs and other funds looking to prove their ESG credentials or simply invest in the momentum.

Ecology funds are the ‘E’ in the acronym and focus on the whole gambit of environmental markets, covering renewables, energy efficiency, water, food and agriculture, recycling, pollution control and sustainable forestry.

The assets in ecology focused Ucits funds has gone from $28bn to $91bn in the 12 months to the end of March, with close to $50bn of that growth coming from inflows.

Hans Peter Portner, Pictet’s head of thematic equity, would not place the blame solely on liquidity for the closure, adding that resources and investment style were also factors in the decision.

Pictet’s fund is the largest in the sector, and soft closed in late March, but the announcement has done little to dent the enthusiasm and it has since taken in a further $440m of new money since then.

At the time of restrictions being introduced, Peter Portner said some capacity remained for institutional investors, but surely that limit is being tested. The strategy, which boasts a 10-year-plus track record, only breached the $1bn barrier for the first time in April 2019, but today it stands at a whopping $10.2bn. 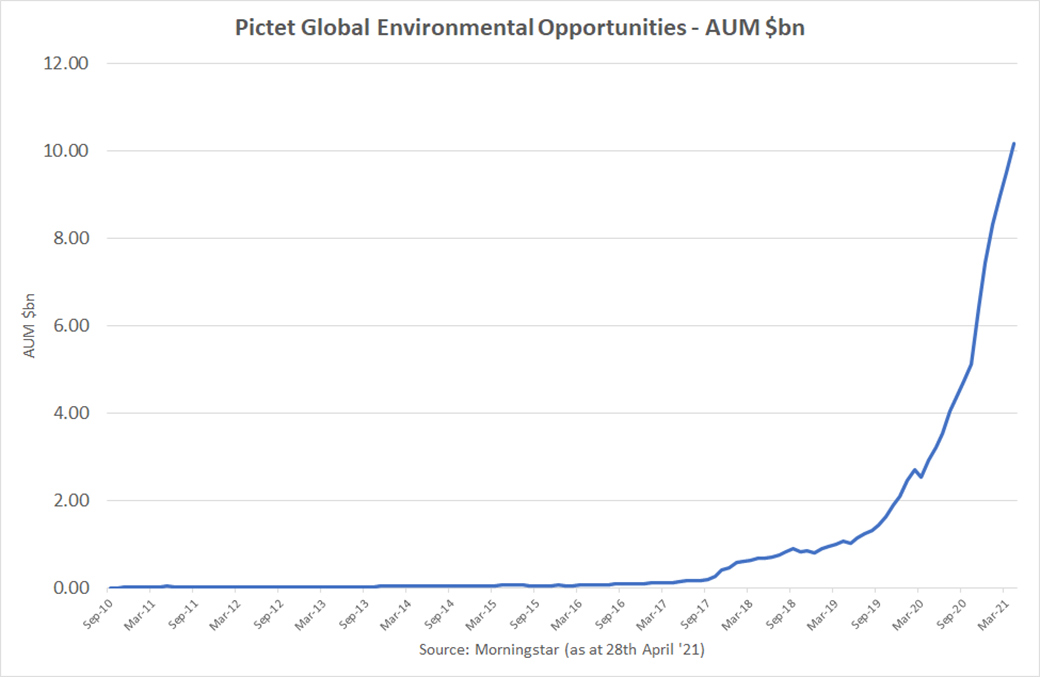 The story is very similar at Nordea, which also has a decade plus track record, it soft closed on the 26 February, but has since had inflows of $700m. It too only hit the $1bn mark a few years ago, but now weighs in at $9.8bn.

Elsewhere, BNP Paribas’s Energy Transition fund, which invests in a smaller subset of companies and returned 299% over the past year, also restricted new investment in February once it neared $4bn. The decision here was also taken on a resource basis, saying it needed time to identify new opportunities. 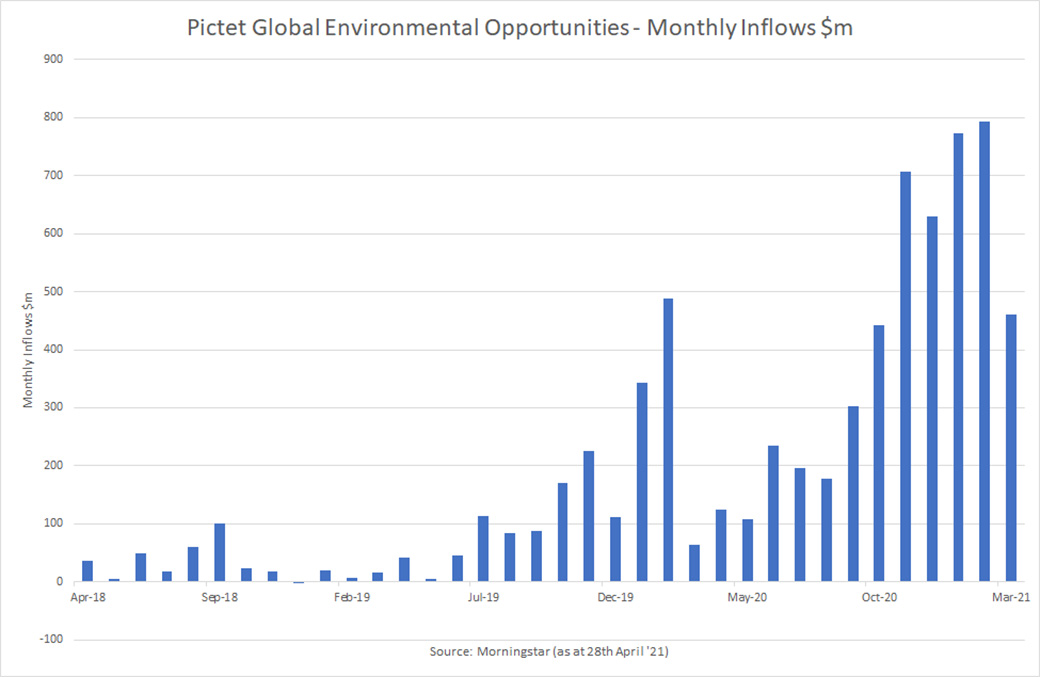 This all points to a set of fund managers being simply overwhelmed by the volume of money pouring into the space. For such long-standing portfolios to go from well-known, albeit niche, to some of Europe’s largest in a couple of years is a big change.

With semi-conductors and related industries being a favoured play, on the grounds that not only are semi-conductors heavily used in electric vehicles, they are also they are fundamental in energy efficiency.

The counter argument to this is that semiconductors are fundamental to almost every aspect of modern life. This highlights the question of just how pure a play these funds are, given that those drawn to ecology funds are probably looking to tap into companies whose core business is the environment.

Until recently both Vestas and Orsted, the darlings of the European ESG world, both featured as Pictet’s largest two holdings, but are absent from the latest factsheet’s top 10 positions. These two companies have clearly done very well in recent years, but Pictet’s willingness to reduce its stakes does show just how hot this space has become.

The transition to a low carbon global economy is the biggest structural trend in the world, so it warrants investors’ attention, but with so much money chasing the theme, it certainly has the hallmarks of a crowded trade. Those getting involved now may well get burnt if there is even a whiff of bad news or the theme stops being in vogue.

Best of Frenemies: Unexpected Role of Social Networks in Ecology

‘Croak down’ on mosquitoes, say ecologists: Drop in frog and odonate populations…

The earliest Denisovans and their cultural adaptation – Nature Ecology &…

Down to Earth: Jameel Arts Centre’s annual festival celebrates ecology and the