Communities Not Cages calls for overhaul of prison sentencing laws


“It was excruciating,” said Nancy Gertner, a retired federal judge who now teaches at Harvard Law School, about enforcing sentences she did not agree with.

In one case the former judge presided over, a 19-year-old had previously been charged with stealing drugs as a 14- or 15-year-old. Gertner said he was stealing the drugs to buy school supplies for his younger siblings.

As the man stood in front of Gertner, she charged him for an additional drug distribution offense which she described as minor. But because the man was previously convicted, the minimum sentence she could prescribe was 10 years.

Gertner said she had no choice but to give him the sentence.

“I was essentially a cog in the wheel of mass incarceration,” she said.

On Wednesday, Gertner spoke at a press conference run by Communities Not Cages, a grassroots campaign advocating for New York state legislation relating to prison reform and ending mass incarceration. The group is looking to “decarcerate prisons and overhaul New York’s racist and draconian sentencing laws,” according to its website.

Over 120 organizations have expressed their support for the campaign, including the New York Civil Liberties Union, The Legal Aid Society and the Center for Community Alternatives, among others. Groups in Syracuse, such as the National Action Network’s local chapter and the Alliance of Communities Transforming Syracuse, have also joined Communities Not Cages.

The organization is specifically pushing for three pieces of legislation within the state: the Eliminate Mandatory Minimums Act, the Second Look Act and the Earned Time Act.

Madeleine Rose Hamlin, a Ph.D. candidate at Syracuse University, said that mandatory minimums were initially designed to reduce discretion and bias in the criminal-legal system. But in practice, she said, they have had a number of adverse effects.

“By limiting judicial discretion, judges can no longer set sentences based on any individual circumstances that might otherwise lessen the sentence,” Hamlin wrote in an email statement to The Daily Orange. “And rather than reducing bias, they tend to disproportionately impact people of color.”

According to the Correctional Association of New York, 73.6% of New York’s prison population is Black or Hispanic as of 2019. Marvin Mayfield, the director of organizing at the Center for Community Alternatives, called New York’s sentencing laws racist and draconian during the press conference on Wednesday. 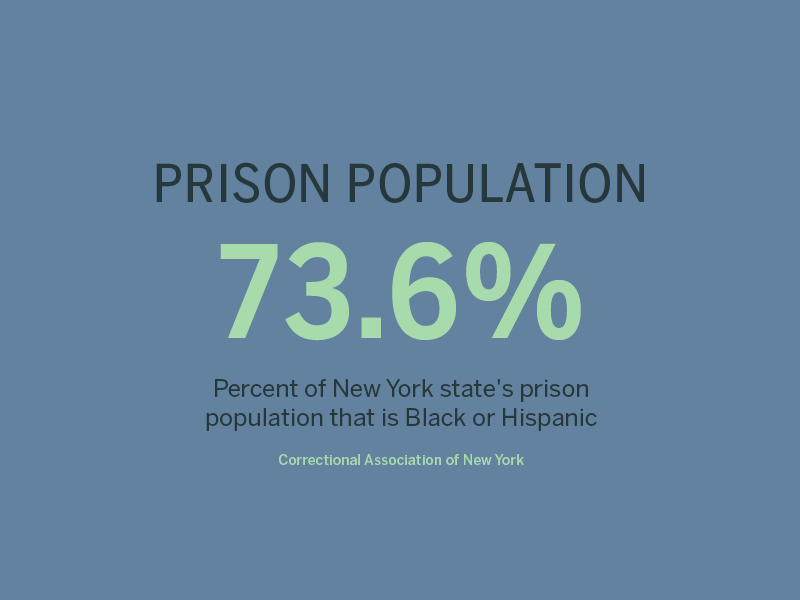 “This is not an accident,” Mayfield said. “This is a pattern of racism and discrimination that can be traced back to its roots in slavery.”

Communities Not Cages is pushing to pass legislation S7871, which “eliminates mandatory minimum sentences,” according to the New York State Senate’s website. The bill is sponsored by State Senator Zellnor Myrie, who spoke at the press conference.

Darnell Epps, a current student at Yale Law school, also spoke at the press conference. Epps was previously incarcerated for 17 years, originally starting with an indeterminate life sentence. His judge, Epps said, wanted him to have a reduced sentence but was unable to because of mandatory minimum sentencing laws.

“No one should be punished based on a predetermined number,” he said.

Communities Not Cages also supports New York State Senate Bill S7872, which “provides incarcerated individuals who have been sentenced to lengthy prison sentences of a decade or longer the chance for a second look at their sentence,” according to the bill.

The bill is sponsored by State Senator Julia Salazar, who represents a collection of neighborhoods in Brooklyn.

Second look bills have passed in Illinois, Louisiana, Maryland and Oregon according to Communities Not Cages.

The Earned Time Act would guarantee that if someone incarcerated met criteria for “good time” they would earn it, said New York Assembly Member Anna Kelles, the bill’s sponsor, in the press conference. After a period of time, the good time would become permanent.

Hamlin wrote that earned time refers to “a reduction in someone’s maximum sentence length that is earned in exchange for good behavior and, usually, participation in some kind of positive programming while incarcerated, like work or education.”

State Senator Jeremy Cooney said that the prison system has seen a decrease in the amount of good time or merit time awarded in previous decades. For those who disagree with the piece of legislation, Cooney argued that the bill would also protect corrections personnel.

The legislation, he said, “protects corrections personnel by creating a more healthy, productive, positive environment that recognizes the individual’s need to be rehabilitated, not punished.”

Kerry Gant, a restorative justice advocate, said that the passing of the Second Look Act would set a precedent not just for New York state, but the entire country.

The three bills would “work towards reducing sentence times and allowing more flexibility to account for individual circumstances, which at least in theory should work towards decreasing our reliance on long-term incarceration,” Hamlin wrote.

This Online Directory Is Like a Queer Yellow Pages

Beyond Neoliberal Politics: What a Multiracial US Democracy Requires