As part of my role of Fashion Designer Officer with Mistura (Camebol), I did anthropological research on Tarabuco, Bolivia. Tarabuco is a small and peaceful town however on Sundays people gather for the traditional markets and the streets gets busy. The town is known for its handicrafts and arts.

During the research, I learned about the Quechua people. The Quechua people are often portrayed to be from descendants of the Incas, however the history of the Quechua people started numerous years prior to the Inca civilization rising to power (Peru for less, 2020). It kept evolving after the Spanish conquerors and pilgrims showed up in the 16th century. Quechua are indigenous people who live in the Andean mountains in South America such as Ecuador, Bolivia, Chile, Colombia, and Argentina (Atlas of Humanity, n.d).

Quechua celebrates Christmas and Easter which they adopted from the Catholic religion. They also continue to celebrate their ancient holiday, Inti Raymi. Incan honoured the Sun to make sure they would not be impacted by the lack of sun during the winter and that they would have a healthy harvest. This is the most important festival of the Inca and is celebrated every June 24th to honour the Incan Sun King, Inti and Pachamama, Mother Earth (Kuoni, n.d). It also starts the Incan New Year and winter Solstice when the sun is the farthest from the side of the earth and ends the shortest day of the year. This celebration attracts tourists around the world. It includes copies of the Inca tunics instead of the contemporary Andean clothes. Quechua reenacts the Inca sun-adoring service. There is an individual dressed as a snake which symbolizes the underworld, an individual is dressed as a Puma to symbolize Earthly life and an individual dressed as a Condor symbolizes the heavens. At this event, there is a lot of eating, drinking, and dancing. Consistent with Inca tradition, a llama is pretended to be sacrificed on this day and a faux heart is held up to Mother Earth, Pachamama to make sure they have a good harvest season.

One of the moodboards for the line of purse for Mistura (Camebol) was the clothing worn during the Inti Raymi celebration. These moodboards were presented to the partner organization for inspiration. 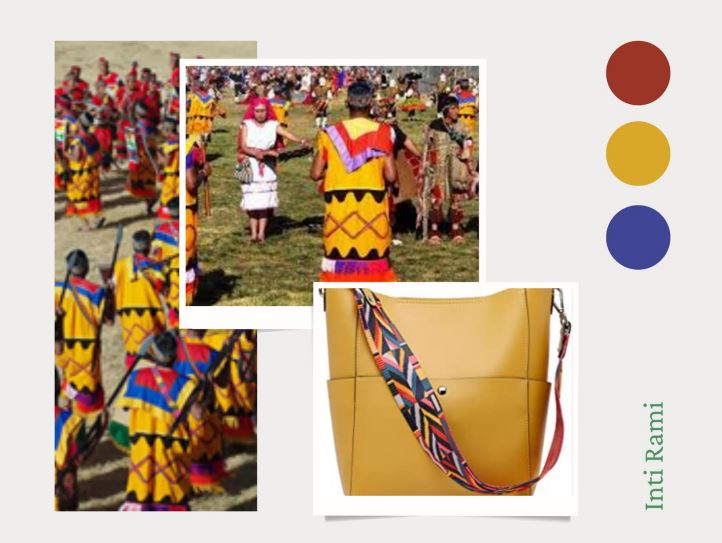 Atlas of Humanity. (n.d). Quechua People. https://www.atlasofhumanity.com/quechua#:~:text=Quechua%20people%20are%20indigenous%20people,%2C%20Chile%2C%20Colombia%20and%20Argentina
Kuoni. (n,d). Inti Raymi: What it is and why you need to witness it. https://www.kuonistores.co.uk/peru/inti-raymi-peru
Peru for Less. (2020, May 18). Quechua People: A Living Andean Culture. https://www.peruforless.com/blog/quechua-people/

How is cultural immersion different to cultural appropriation?

Ways to Know Your Medical Mission Trip Is Worth It

How to Prepare for Interning Abroad

Family Volunteer Account of Serving in Poland: “Ukrainians Ask Only That We Don’t Look Away”

Made by hand, Traded by Heart • Volunteer Blog