Find yourself on Curieuse, GVI’s smallest conservation base in the middle of the Seychelles archipelago. But what’s so special about this tiny granitic island?

The curious history of Curieuse Island

Originally named Ile Rouge for its fiery-red soil by French explorer, Lazare Picault, Curieuse is one of the smallest of Seychelles’ 115 islands in the West Indian Ocean.

Covering an area of only 2.86 square kilometres, it’s a wonder any expedition made the stop. But in 1768, French explorer, Marc-Joseph Marion du Fresne, colonised the island, renaming it after his ship, La Curieuse.

During the French occupation of the island, various fires then ravaged Curieuse and its wildlife. Rumours suggest the Europeans deliberately destroyed parts of the island with fire, to make harvesting of the world-famous coco de mer plants easier. The largest and last significant fire, in 1771, left rugged scars on the rocky landscape that can still be seen today.

More recently, from 1829 to 1965, Curieuse was used as a leper colony by the Seychelles government. Although this was to help isolate and eradicate the disease, the Governor of the Seychelles government also noted that this use would allow Seychelles to take back responsibility of the island’s vulnerable ecosystem: specifically, the preservation of the precious coco de mer trees.

The colony consisted of a small cluster of stone buildings or shelters. It was metres away from the ocean, and residents had spectacular views of neighbouring Praslin island.

Today, these ruins boast an enchanting charm and quaintness, due to their wobbly-looking, but strong stonework, and crooked doors and windows. With the addition of a few bunks and simple maintenance work, the buildings have now been converted into GVI volunteer accommodation on Curieuse.

Its historical significance, coupled with its position, camouflaged on the edge of the treeline, makes this one of the most unique and intriguing GVI bases to live and work on.

Ready to join us in Seychelles?

The neighbouring island, Praslin, also grows coco de mer in the forests of the Vallée de Mai Nature Reserve, a UNESCO World heritage site. But this is not a natural forest like on Curieuse.

Swarming around the iconic, top-heavy sproutings of the coco de mer are Curieuse’s seemingly endless thick and rich mangroves. Winding walkways and narrow pathways guide you from Baie Laraie and Anse St José, through the maze-like map of these triffid-looking forests.

The several different mangrove species found here are all critical to the island’s ecosystem.  Monitoring them is part of GVI’s ongoing conservation work, together with the Seychelles National Parks Authority (SNPA).

Anyone wishing for some quiet away from the chaos of daily life will relish in Curieuse’s uninhabited environment.

Perhaps the most noticeable presence on Curieuse is the 300 strong colony of Aldabra giant tortoises. It’s a true wonder to see them roaming free. Before you see these majestic creatures, you will probably hear their deep mating roars bounce off the vegetation canopy.

Beady eyes peek out from the swooping heads of the slow beasts as they amble and mooch. The mottled and weathered shells seem cartoonish at first glance, big enough to house these 400-kilogram herbivores, which can grow to 1.3 metres in length.

The Aldabra giant tortoise is very much at home on this island, and home among humans: unfazed by the occasional tourist, or volunteer collecting data. You can join the GVI team in helping to protect these prehistoric-looking, gentle island wanderers.

As a Curieuse volunteer, living directly on the beach at Anse St José, you will live among remnants of island history, and contribute to one of GVI’s smallest research bases.

You will learn how to identify and survey coral, fish, plants and wildlife in this delicate but densely rich ecosystem.

GVI’s data collection, together with the SNPA, helps protect Curieuse Marine National Park, which was created in 1979. This conservation work helps support the creation of conservation policies for the future.

These policies help GVI’s partners, like Nature Seychelles, and the Seychelles government, look after the tortoises, mangroves and coco de mer. They also help stakeholders to safeguard the rarely spotted Seychelles black parrot and the diverse fish, turtle and marine life surrounding this special island.

Despite its enchantingly small size, Curieuse offers numerous exploration adventures. Follow the rickety mangrove boardwalk to the coco de mer tree line, and wind your way up through overgrown vegetation to the summit.

There is no clear path. You may need a large stick to beat away the green blankets of hot, wet growth to find your way. Be prepared for some scrapes and scratches. 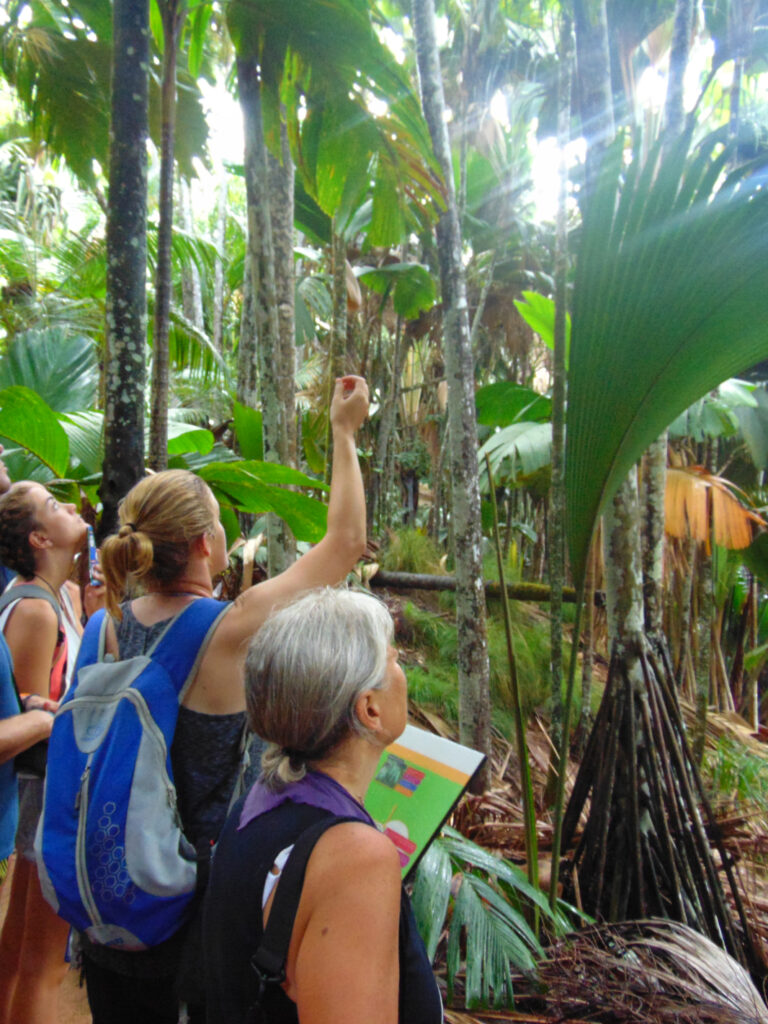 Look out for the characteristic granitic rock formations. “Lizard rock” is aptly named due to it appearing like a giant lizard climbing the cliff. And can you spot what seems to be a tortoise poised to take the plunge into the ocean?

The 360-degree view from the top of Mount Caiman, Curieuse’s highest point, is worth the sweat, stickiness and sores from the gruelling, off-road climb.

After inhaling this pivotal view, coax branches and bushes out of your way back down. Listen for black parrots as you go, and soak off in the tropical blue bath waters of this Seychelles jewel.

There will always be more to be curious about on this small island of life.

Leveraging Nonfinancial Support to Scale Healthcare Access for All

Leveraging Nonfinancial Support to Scale Healthcare Access for All

Why I Give: Helping Developing Communities Become Self-Sustaining

What is it like living as a digital nomad?

Finally, Some Good News Related to the SDGs